we made it home from thanksgiving at 12:30 or so, and after decompressing i still couldn’t sleep. i finally got to sleep around 6, and my partner woke me up at 7:30.

“ok, can you move the dehumidifier?”

i went back to sleep. i can’t do a flood on less than two hours of sleep.

so i woke up in the mid-afternoon and put on some shoes (we’re usually a shoe-free house) and tried to pretend that the flood didn’t exist. maybe if i pretended well enough it wouldn’t, right? but it didn’t work. so eventually i started moving furniture.

you may recall that we had a flood the first day we owned the house. it hasn’t actually flooded much since then, but when that one happened we pulled the carpet out of our living room. we don’t like carpet much anyway, so that was fine. after enough subtle hints that our non-carpeted concrete floor was ugly, i had a genius idea:

cardboard floor is your best plan if you live in a place that floods sometimes. dealing with a flood sucks, but it sucks a lot less once you’re used to it – you don’t keep anything fancy on the floor, and you don’t have anything that will get moldy on the ground. so we put the cardboard floor in and covered it up with a rug my grandmother brought home from… turkey? i think turkey, in the 80’s. 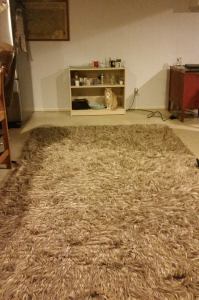 the rug. not pictured: cardboard floor

so we have this magnificent rug, which is made of wool so we don’t have to worry too much, and then the cardboard floor.

when the cardboard floor gets wet, you can hardly tell. it warps a little. but the best thing about it is that if you do a little wet floor dance, it soaks up a ton of the water and then you can get rid of the cardboard and the water all at once!

it is sad that cardboard floor is my most clever idea in a while.

after we got the cardboard out, we had to pull the carpet out of the bedroom. it was swampy in there; when we walked the carpet made “squelch, squelch” noises. it was a little sad taking the carpet out, because it was brand new when we bought the house, but it was tempered by the fact that we would probably have to take the carpet out anyway because: meth. so now we have a roll of wet carpet and bags of carpet padding behind our garage, in “these are probably too contaminated to give away” territory.

the rug, above, is one of the things i think we’re going to try to keep… i need to check and see if having it dry-cleaned will get it clean enough. i hope so, because it’s a special thing. and because the cat really likes to sleep on it.

we're two kids (and a cat) in the pacific northwest who just learned that our house is full of meth. we're trying to figure it out. if you want to start at the beginning, click here.

get updates by email!